WSJ: In its third year, The Ringer’s podcast business is the main engine

Yesterday, the Wall Street Journal published a story that offers some insight into the podcast business over at The Ringer, the digital media operation Bill Simmons founded three years ago. Its podcasting health is something I’ve been wondering for a while now, partly because their output makes up a disproportionate amount of my own personal listening, but mostly because I just find their rapid, iterative, enthusiasm-driven approach to podcast production fairly compelling. In 2017, I called them one of the most interesting companies in podcasting due to their embrace of the fact that it “isn’t for everybody, but when it’s yours, it’s really, really yours.”

From the sounds of the WSJ report, titled “For Bill Simmons’ The Ringer, Podcasting is the Main Event,” things are looking pretty good.

Not to strip-mine the report (written by Ben Mullin and Joe Flint), but here are the key details as I see it: The Ringer’s podcast ad sales beat $15 million in 2018 (and accounts for most of its revenue), its podcast network brings in around 35 million downloads across 28 shows, and Simmons says that the company is profitable. Headcount is apparently expected to grow up to 100 this year, and company leadership appears to be eschewing outside funding — particularly venture capital — to power further growth. (It should be noted, though, that HBO bought a 10% stake in The Ringer at the start of the business.) And for the curious: Midroll Media is responsible for ad sales, and The Ringer is thought to pocket more than two-thirds of podcast revenues after Midroll takes its cut.

So, I don’t think you can really tell the full story of The Ringer’s podcast business without talking about the nature of its output: the network consists almost entirely of conversational programming, which generally better allows for higher publishing volumes — and therefore, higher counts of ad slots — and typically requires lower costs to produce compared to shops that specialize in resource-intensive, seasonally-structured, often limited-run narrative shows. That said, adhering to a high-volume approach doesn’t really matter if it doesn’t actually strings together a listenership, and so it’s worth recognizing the importance of The Bill Simmons Podcast, which, if you count its predecessor The BS Report, has been cultivating an audience for almost a decade now. The Bill Simmons Podcast anchors the network and presumably functions as a crucial stabilizing force, brand leader, and podcast marketing platform. (After all, the best way to promote podcasts is still through other podcasts.)

Not that you can chalk the effectiveness of The Ringer’s podcast business purely up to the publishing structure. Credit should also be given to the meat-and-potatoes of assembling a staff writers that can additionally function well on the mic, some amount of taste, and the fact that, as previously mentioned, the company experiments and iterates very, very quickly with its podcasts. (Having a seasoned Chief Operating Officer also helps.)

It’s worth noting that The Ringer isn’t the only digital media company that looks the way it does. (Which is to say, it’s not an entirely unique creature.) It has a spiritual sibling in Crooked Media, the politically-oriented digital media company that also features a prominent podcast network as its central offering. (Longtime observers will recall that there is history here: The Ringer gave Crooked Media’s Jon Favreau and Dan Pfeiffer their podcasting starts with Keepin’ It 1600, the predecessor to Pod Save America.)

According to a Vanity Fair write-up from last summer, Crooked Media’s ten-podcast-strong network is thought to comfortably book eight-figure revenues, which places it around the same revenue territory as The Ringer, albeit off a smaller portfolio. That network is also anchored by a dominant show: the aforementioned Pod Save America, which nowadays averages 1.5 million listeners per episode, according to the New York Times, and is speculated to bring in about $5 million per year by itself, according to The Guardian.

Like The Ringer, Crooked Media also appears to have generally abstained from investment in order to maintain its independence, relying on generated podcast revenues to further the business. “We want to do stuff with this company that will have a political benefit, that might not have any financial benefit,” Crooked Media co-founder Tommy Vietor told Recode. “Explaining that to someone if you’re part of a broader organization would be difficult.”

So, what, exactly, are the lessons to take away from the Crooked-Ringer dyad? Is it possible to take away some replicable blueprint for new podcast operations? To be perfectly frank, I’m not particularly sure. I have a feeling that Crooked-Ringer might actually have more to say about the theory of the personality-driven media company — previously incarnated as the “star journalist-driven media company” trend of 2014, a la Ezra Klein and Nate Silver — than it does about the podcast business in general.

That said, if we framed the question as: could The Ringer and Crooked Media have reached where they are today — which is to say, a relatively modest business that allows for creative flexibility, independence, and expression — through the strength of any other medium? I’m inclined to say no, but in the spirit of a segment on The Rewatchables, that’s probably an unanswerable question.

Something that might be more answerable, though, is this: 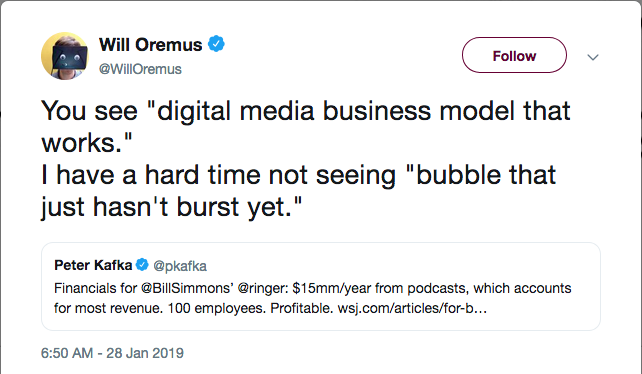 We’ll get to that in a bit. But first, let’s run the other stuff.