Wilson FM: And now for something completely different

"I didn’t want to do that when it came to building something that was my own and close to my heart so the only ethos was Anti. The inspiration is Anti-tech, Anti-convention, Anti-UI/UX Design."

So, there’s this new podcast app-doohickey that came out last week that really caught my eye. It’s called Wilson FM — a name I will forever associate with a volleyball (I’M SORRY, WILSON) — and the thing is billing itself as a “podcast magazine,” which on most days would be a piece of nomenclature that I’d find vaguely annoying. Except that a podcast magazine is exactly what Wilson FM is, and it’s also one of the more pleasurable player ideas I’ve seen in a long while.

The core mechanic isn’t anything particularly revolutionary, other than the fact that it’s remarkably simple. Every week, the app-magazine-thing serves you a new curated playlist of podcast episodes built around a different theme (most of the time). There’s one about art, there’s another about the Supreme Court, and then there’s a collection that’s really just threading together Lea Thau’s Love Hurts series. In other words, it’s a fancy podcast playlist provider, but putting it that way is a little like saying a magazine is a fancy provider of words. I mean, it is, but also, it isn’t, because something has to be said about a thing feels in the use of it, and man, Wilson FM feels so… different. And as a result, interesting. 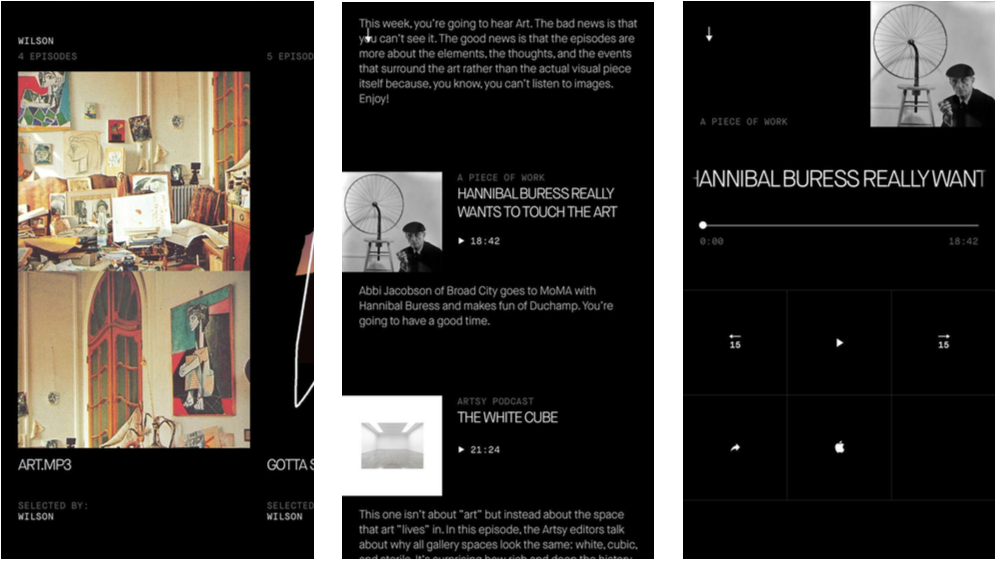 Granted, this just might be a situation where I’m responding extra-positively to a drop of water after weeks of drinking nothing but straight-up seltzer. Which is to say: every podcast app that I’ve used more or less looks and feels the same despite new feature-concepts — say, a social layer — or an expanded suite of bells and whistles, which as a matter of collective experience generally brings me to place where it’s a little like waking up every morning and relentlessly commuting in a city you once found interesting: after a certain point, you just stop seeing the world around you in new and renewably invigorating ways.

My positivity might also have something to do with how consumer software technology aesthetics seem to be largely situated within a same, sterile place. My buddy Kyle Chayka, a freelance writer who’s currently working on a book about minimalism, dubbed this aesthetic “AirSpace” in an essay for The Verge back in 2016, and you probably already know what he’s talking about: pastels, curved edges, any sharp sense of personality sandpapered away.

In contrast, Wilson FM is weird. Its visual sensibility evokes the new media section of an art school exhibit (or a moderately-sized modern art museum). Its app icon is a funny little scribble. Its squint-to-see-it font has a counterintuitive charm. All these quirks of expression are tied to the fact that the app is primarily the work of one person: Allan Yu, a New York-based designer who’s done stints at Google X, the search giant’s super secret R&D lab, and Svpply, a now defunct social shopping site that was acquired by eBay in 2012.

“I’ve always had a soft-spot for print design and aesthetics that have a point of view or opinion,” Yu tells me over email. “But I’ve been working in tech for quite some time and am just tired of this A/B tested, data-proven, metric driven design.” He continues:

I didn’t want to do that when it came to building something that was my own and close to my heart so the only ethos was Anti. The inspiration is Anti-tech, Anti-convention, Anti-UI/UX Design. I looked at a lot of print stuff that mainly contributed to the organization and focus of these Issue covers. Even the proportion of the cover is print based and I use two typefaces from one of my favorite type foundry, Milieu Grotesque. I also wanted to elevate podcasts aesthetics. I don’t understand why a content form with such richness sonically is watered down visually. In some ways people do judge books by their covers and I wanted to make the covers better, so you’ll give that episode/podcast a chance.

The playlists on Wilson FM are generally built ad hoc, which Yu believes is the best way to do it. He tries to build them with his friends, and he writes the copy in a way that he feels is natural to the way he speaks. Personal touch, individual voice, all that kind of stuff.

In the physical world, Yu is a design consultant/working mercenary, doing gigs to keep things spinning as he builds out Wilson FM. He tells me that he intends to build Wilson FM out into a business. “We want to do it right and our way, which in context of tech businesses today, it means we want to grow it slow,” he told me. “We’re focusing more in the magazine model as we want to mainly be a voice for podcasts within the podcast community.” In this broader pursuit, he has a business partner, Cameron Koczon, who runs an engineering and design studio in Brooklyn.

That Yu hopes to build Wilson FM into a business — that this wasn’t just a side project or exercise — surprised me a little bit. A big part of me reflexively thinks something this specific and idiosyncratic has a hard ceiling that hovers low (*looks at Hot Pod, shudders*), regardless of what business model gets integrated into the app. But then again, a bigger part of me is in this for the specific and idiosyncratic, and someone’s going to figure out how to make that work and grow, then, hell, this is probably just about how you’d start: simply by being genuinely interesting.