Months after being dismissed following allegations of inappropriate behavior, Leonard Lopate is back on the air at the Brookly-based WBAI. The hiring has sparked great pushback.

This one’s a big, fat, complicated mess, and though it isn’t directly related to podcasting, it continues a story that’s been tracked in this newsletter: the workplace culture crisis at New York Public Radio.

Last December, the veteran WNYC radio host Leonard Lopate was one of two key individuals dismissed from New York Public Radio following an investigation into allegations of inappropriate behavior towards his female colleagues. As you might recall, Lopate’s dismissal took place amidst a broader imbroglio consuming WNYC — sparked by an expose from the journalist Suki Kim centering on John Hockenberry, the former host of The Takeaway — that saw a reckoning with the station’s management style, which was deemed to have manifested a culture that allowed for bullying, harassment, and discriminatory behaviors that have especially hurt women and people of color.

The complications from that crisis seems to have jumped across stations within the city. Lopate returned to the airwaves earlier this month after he was approached by WBAI, the Brooklyn progressive non-commercial radio station where he had started his career over three decades ago. Lopate is now on a six-month contract with the station, and his new afternoon show, called Lopate at Large, started broadcasting on July 16.

WBAI’s hiring of Lopate was met with protest from within the station, as the Columbia Journalism Review reported last Tuesday. The CJR piece quoted several WBAI producers and hosts who openly questioned the station’s decision, and the hiring has resulted in several notable resignations or publishing breaks: Jay Smooth, who has hosted the hip-hop radio program Underground Railroad for almost twenty-nine years; Jeannie Hopper, whose dance music show Liquid Sound Lounge has aired on Saturday nights for over twenty-five years; and Rebel Diaz, the hip-hop duo whose radio show airs on Wednesday nights.

Another detail worth noting: WBAI exhibited some truly bizarre behavior over Twitter when the station came under pressure last week. The station’s Twitter handle retweeted an anonymous account comparing Lopate to Jackie Robinson (those tweets have since been un-retweeted), cited the lack of “proven sexual or physical allegation by WNYC” as justification for Lopate’s hiring (that tweet has since been deleted), and publicly lashed out at Smooth’s criticism with a snarky and financially-oriented tweet (that one is still up, apparently): 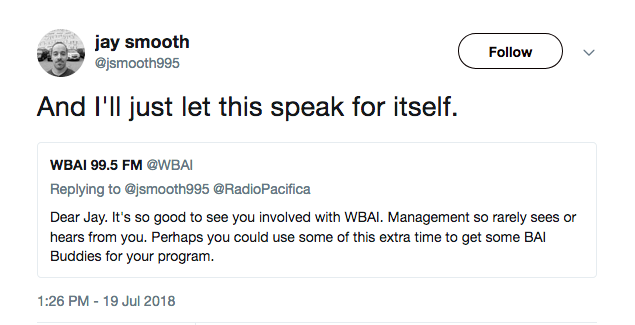 Just so we’re clear: this is insane.

The station’s leadership spelt out the motivation behind Lopate’s hiring in pretty clear terms. In an email to CJR, WBAI general manager Berthold Reimers phrased the thinking as follows:

You know at WBAI, I don’t think we have 5,000 people listening for the whole week… once we have all these people listening to us for him, this is ultimately an easy form of marketing. There should be no question that our numbers go up for all the other shows because of their quality that no one knew about.

As conveyed in the CJR report, WBAI is an operation on the backfoot. In 2013, the station let go most of its staff to cover basic operating costs. Its owner, the Berkeley-based Pacifica Foundation that’s known for its progressive bent, is on the edge of bankruptcy due to mounting debts. Station producers are largely volunteers these days; they are not paid for their work producing, and even hosting, their shows. Reimers is portrayed in the CJR report as a general manager distinctly focused on increasing the station’s visibility as well as its ability to apply for CPB funding.

From that vantage point, you can broadly see the cold logic governing WBAI’s choice: despite the allegations against him, Lopate is believed to have a loyal following that could potentially aid the ailing station’s performance. And so the cold decision was made to execute the deeply controversial move of bringing on Lopate that pits the pursuit of financial health at the expense of its workplace environment primarily staffed by mission-oriented workers with significantly less power. The fact that the station is paying Lopate and his producer, as Reimers confirmed to CJR, while many of the other station workers continues to go unpaid is further consistent with the station’s cold strategic thinking. (WBAI’s Twitter behavior, however, remains unfathomable.)

It’s a strategy, and it’s a tragedy. These are times when moral leadership feels vanishingly distant — past sources keep being swallowed by chaos, corruption, or death, as it seems to increasingly be the case these days — and so the story of a progressive community radio station throwing its values under the bus for the supposed purposes of survival not only stings, but seems depressingly fitting for where we are right now. What’s the point of fighting for another day when you’ve compromised what you’re supposed to stand for? It’s a timeless question, but one that has never felt more timely than it does today.

On a related note…