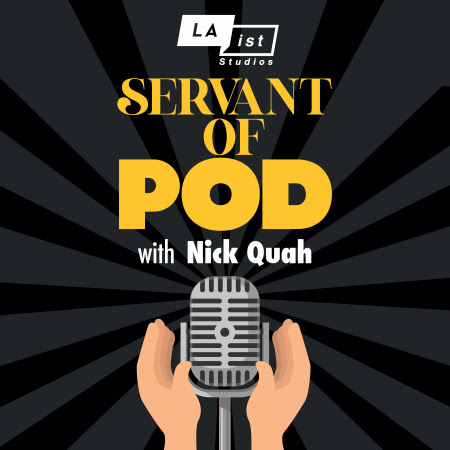 Today, we’re launching Servant of Pod, my new weekly podcast about podcasts that I’m making in partnership with LAist Studios. It will be, for the most part, an interview/conversational show, though we’ll see what else we can do with the format as we get our feet under us and start building out some muscle.

Obviously, you can subscribe to the show on Apple Podcasts, Spotify, Stitcher, and the wide universe of third-party podcast apps that pull from Apple’s directory, whether it’s Pocket Casts, Overcast, Castro, Breaker, Radio Public, whatever. (It doesn’t appear to be on Google Podcasts yet, ¯\_(ツ)_/¯ I guess.)

And if you’re using Apple Podcasts, I’ll say: leave a rating and a review. Time to see how this system works for myself.

Anyway, I’ve been working on this project with LAist Studios for a while, going through ideas and concepts and permutations as the world around us continued to change, fundamentally and incredibly. I know it’s kind of a weird time to be launching a show, just as it has been a weird and hard few years, but my instinct to roll right into it, and hopefully integrate that reality into the show. If we do our jobs right, we’ll be editorially alive to the world.

Servant of Pod kicks off today with two episodes. The first is an introductory piece of sorts; through separate conversations with Team Coco’s Adam Sachs and Earios’ Priyanka Mattoo, the debut entry is meant to set up the current context of the world surrounding the show and lay out some of the initial themes that will undoubtedly be with us for a while. It ends with me getting some advice.

You can find that first episode here.

The second was supposed to be more representative of what’s to come, but recent events brought in a level of relative complexity: it’s an interview with John Moe, the creator of The Hilarious World of Depression. We originally taped the conversation a few weeks ago, but yesterday, we learned yesterday that, due to a budget shortfall said to be related to the pandemic, American Public Media is cancelling the show and laying off Moe — along with 27 other staffers from APM/MPR — from the company. This caught us by surprise, of course, but I really valued that podcast, and I really valued the conversation, so we’re running it. For what it’s worth, I think the decision to cancel the show is a mistake, and I hope someone picks Moe and the show, in some form or another, up soon.

You can find that second episode here.

Now that we’ve talked about the first two episodes, some other things to note about the show for now, in no particular order:

Okay, I’ve said enough, but before we wrap, some words of thanks. First and foremost, I’m deeply indebted to Rococo Punch’s Jessica Alpert and John Perotti, who are producing the show with me and who whipped me from a mumbling fool into performance-ready shape. (I think.) Big thanks, as well, to the team at KPCC/LAist Studios for shepherding the project to the starting line: Kristen Muller, Leo G, Herb, and the web of people who make up an organization over there.

Also: a big, big shout-out to Arwen Champion-Nicks, who, honestly, was perhaps the biggest reason I originally wanted to collaborate with LAist Studios, though she’s since left the organization to go independent. I’m eager to see what she makes.

Alright, I think that’s all I have for now. I hope to earn your listen, your downloads, and your patronage, and I’m excited to see where this goes.