Ariel Shapiro here, live from my couch in Ditmas Park, and I am extremely excited to present my first edition of Hot Pod Insider.

As Jake mentioned a few weeks ago, I previously covered podcasting at Forbes (after much convincing of my editors) and reported out the magazine’s first highest-earning podcaster list. As much as I love sniffing out the rich and famous’ compensation — something you can be sure I will continue in Hot Pod — I am really looking forward to digging deep into the audio industry as it grows and evolves.

Following the trail blazed by Nick and Ashley, I’ll be in your inbox three times a week with scoops, analysis, and Borscht Belt-style punchlines (okay, that part might be specific to me). And I hope to hear from you, as well! Hit me up at ariel.shapiro@theverge.com with tips, recs, and general thoughts.

Maybe Joe Rogan wasn’t bluffing about his post-controversy bump. On Wednesday, the company reported an increase of 13 million monthly active users between January and March this year, bringing the company to a total of 419 million MAUs. It also added 2 million paid subscribers, even when accounting for the loss of 1.5 million Russian premium accounts. That means despite the mayhem that ensued early this year, with music legends like Neil Young and Joni Mitchell pulling their catalogs and infuriated users canceling their subscriptions, Spotify is more popular than ever.

CEO Daniel Ek did not mention Rogan by name but touted podcasting as a growing part of the company’s business and vowed to invest even more in the space. Spotify’s podcast library is now stacked with 4 million shows (up 10 percent since the end of 2021), and Ek claimed that listeners are devoting a larger portion of their time spent on the app to podcasts than ever before. “We’ve gone from being a music business to an audio business,” he said in a call with investors.

That should be great news for the company’s bottom line. The more time subscribers spend listening to podcasts instead of music, the less Spotify has to pay labels and artists in pricey royalties. But investors are still worried about whether Spotify’s steep investments in the podcasting space will pay off, and CFO Paul Vogel confirmed he does not expect podcasting to be profitable for the company this year. Investors are also concerned about Spotify’s capitulation to its biggest and most unpredictable star.

According to CFRA analyst John Freeman, it may take a few quarters for any fallout from Rogan’s controversies to hit Spotify’s balance sheets. Many who soured on the company because of its response to Rogan may not have canceled right away but still could down the line. Meanwhile, some who did cancel likely already paid, meaning the loss of their subscription dollars won’t be felt until next quarter. Plus, with Rogan, the next controversy is always just around the corner. “There is risk of a cascading backlash,” he said.

If Spotify is trying to get around the music labels with podcasts, then the labels are just going to start making podcasts. On Tuesday, Warner Music Group announced it is launching an in-house podcasting network called Interval Presents. Unlike Warner’s joint venture with Spotify last year, which has yet to produce any shows, Interval Presents already has some big names attached. Actress Lupita Nyong’o will host a podcast produced by Snap Judgment, which is on tap to create more shows for the network, and singer / cat Jason Derulo will lead a show by Clamor Audio.

Acast to shut down its app by the end of May

Swedish podcast platform Acast created a bit of a social media stir when it reminded users on Twitter this week that it will be shutting down its podcast app “soon.” Acast’s small (but, if the social reactions are any indication, loyal) user base seemed confused about when the app would go offline. When reached for comment, a representative from the company said that the shutdown will occur before the end of May. 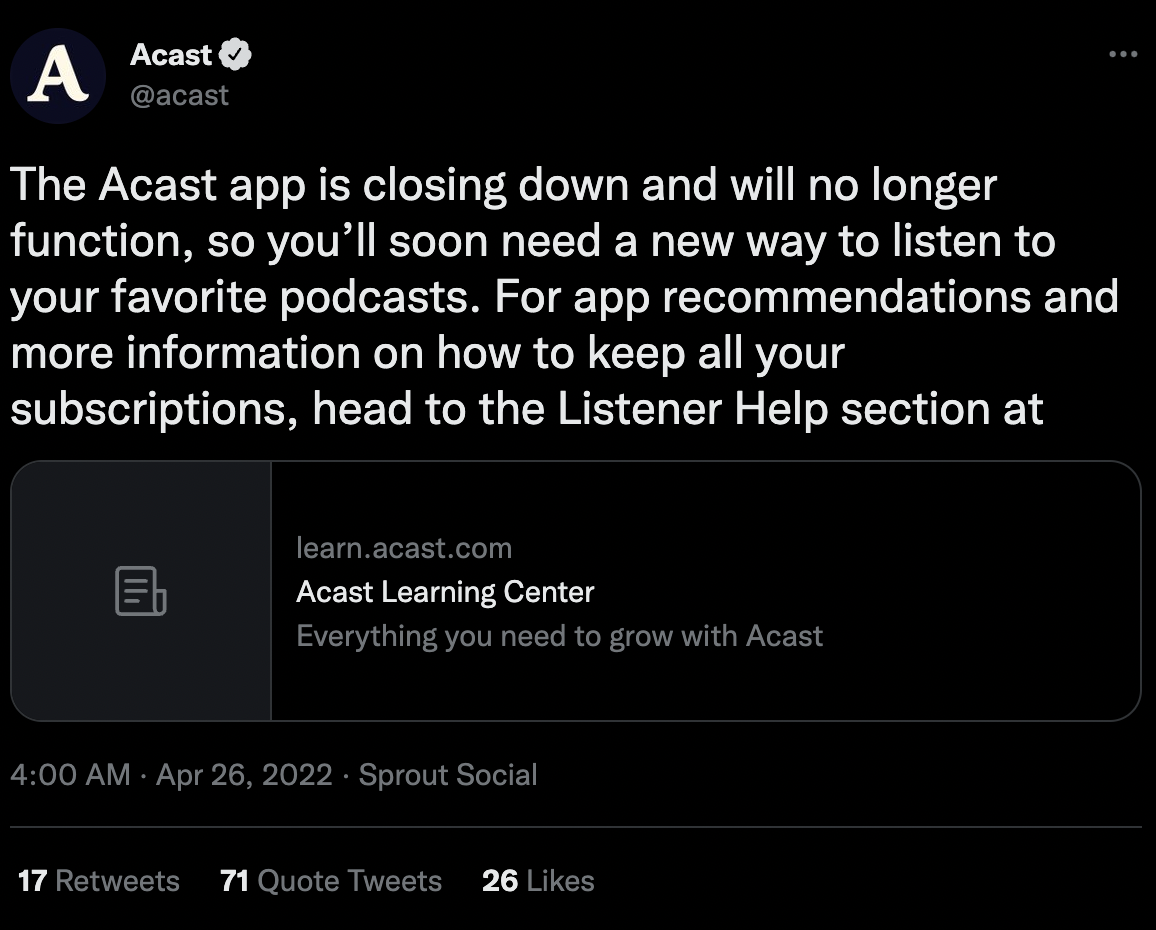 Acast said that a “very small percentage” of its listeners use their app but would not specify how many users would be affected by the shutdown. The app has been downloaded 1.2 million times since it launched in 2014, according to data from Sensor Tower.

The company, which went public less than a year ago, first told investors in March of its intention to shut down the app to focus on other aspects of the business. When users questioned the decision, the company account tweeted that “Acast’s mission is to help podcasters grow and make money across every app — and the 40,000 shows on our hosting platform can be heard anywhere.”

Podcast market will hit $2B by next year

Remember when it was a big deal for podcasting to become a $1 billion industry last year? A report released this week from Insider Intelligence projects podcasting ad revenues will exceed $2 billion next year and surpass $2.5 billion in 2024.

Ad dollars will flow because consumers are spending more time listening to podcasts, according to Insider Intelligence analyst Ross Benes. “There’s not a ton of new people coming into the medium,” he said. “But what’s happening is those who use podcasts are just using them a hell of a lot more. They went from being low listeners to moderate or heavy listeners.” He projects that listeners will spend an average of nearly an hour per day with their favorite shows, a 52 percent increase since 2019.

His projection of the industry crossing the $2 billion threshold in 2023 tracks with previous findings from the Interactive Advertising Bureau and PricewaterhouseCoopers released last year. IAB will release its next podcast ad revenue report on May 9th, ahead of the podcast upfronts.

That’s it for today! We’ll be back tomorrow with SiriusXM earnings, Apple updates, and more.