Getting Caught in a Shit Storm

As many things tend to do these days, it started with a tweet. 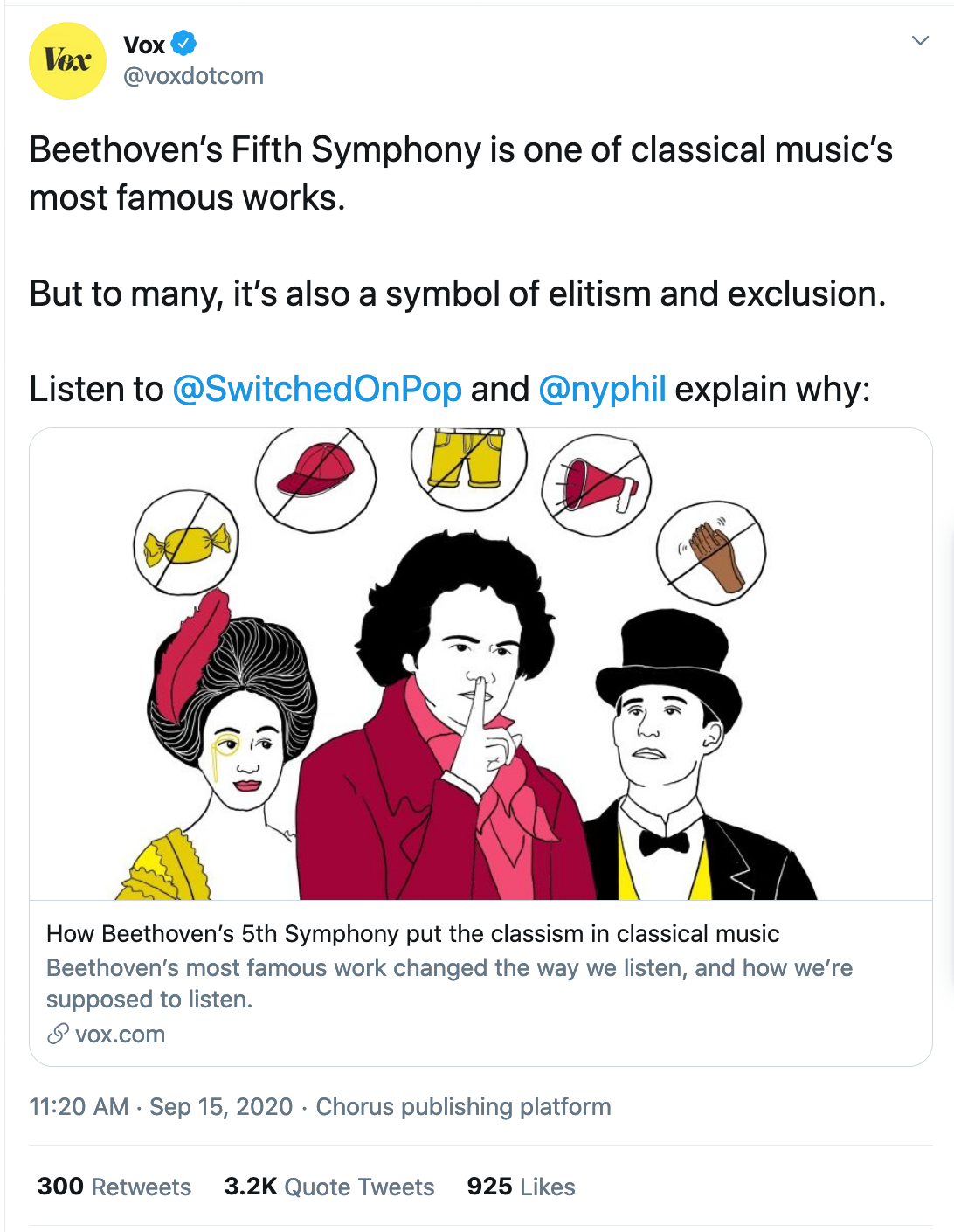 The Vox.com tweet was promoting an episode of “The 5th,” a special miniseries from Switched On Pop, the podcast about pop music by songwriter Charlie Harding and musicologist Nate Sloan that’s currently distributed by the Vox Media Podcast Network. The special came out of a collaboration with the New York Philharmonic and was partly adapted from a lecture that Sloan gives in his university courses, meant to explain the legacy and substance of Beethoven’s Fifth Symphony. (You know the one.)

“Our goal was to help people understand this essential classical piece, which can be challenging to approach, and find fun ways to explore its message of transcendence from darkness as well explore its legacy and how this work resonates two centuries later,” they told me over email. In other words, The 5th was largely meant to be a celebratory piece, albeit one that sought to recognize its historical nuances.

The episode promoted in that tweet, “Movement III, Putting the Classism in Classical,” was the third installment in the four-part series. It was mostly dedicated to discussing how a rising industrial merchant class used Beethoven’s Fifth Symphony as a key piece in shifting the norms of what we now call classical music from something structurally accessible — Harding and Sloan described how, prior to the symphony’s debut in the early 1800s, a night in the music halls usually involved yells, cheers, and expressions of audience enthusiasm, not unlike a rock show — towards something more rigid, mannered, and exclusionary, reflecting the politics of an elite class. It’s complicated stuff within a complicated history, and the episode’s discussion offers a window into a reckoning with race that’s currently happening within the classical music and music theory worlds. (See here, here, and here). Unfortunately, though, you can’t really do that kind of work in public these days without exposing yourself to the possibility of being flattened down, taken out of context, and ground up as fuel for the compulsive phantasmagoria of the online “culture wars.” Which is exactly what happened.

(Quick obligatory disclaimer: I’m a contributor to New York Magazine’s Vulture, which also syndicates Hot Pod. New York Magazine is owned by Vox Media. I am, however, an independent self-employed writer, proudly so.)

For about a week following the tweet’s publication on September 15, the Switched On Pop crew found themselves sucked into a bizarre game of shit-kicking Telephone. The whole thing started, unsurprisingly, with the conservative commentator Ben Shapiro — a voice historically eager to antagonize anything related to Vox.com — who quote-tweeted the promo with the message: “Let me put this as delicately as humanly possible: go f*** yourselves.”

That alt-signal boost instigated a massive chain of tweets from a mixture of garden variety Twitter egg trolls and a cluster of high-reach right-wing agitators, including Senator Tom Cotton, Dinesh D’Souza, and Ian Miles Cheong. And that, in turn, was followed by blog posts from several conservative and right-leaning media sites — The Federalist, American Thinker, Quillette, and the NY Post, among others — decrying the episode as an attempt by “the woke” to “cancel” Beethoven. The entire left-right dynamic got even more flattened in a smattering of headlines published later on: by September 21, you could find a blog post from Classic FM, a UK classical music station, with the title: “Beethoven ‘cancelled’? Why people are debating whether the Fifth Symphony is elitist.”

It’s a lot, and I just want to say write off the bat that this is yet another pretty clear example of online pots-and-pans-banging by bad faith actors. Harding and Sloan observed that their situation would’ve slotted neatly into Andrew Marantz’ 2019 book “Antisocial: Online Extremists, Techno-Utopians and the Hijacking of the American Conversation,” which in part sketches out the schematics of how dedicated online political agitators systematically transform just about anything into ammunition that can be fed into a simulacra of outrage that can in turn potentially shape what people think about when they think about a certain topic, issue, or conversation. It’s all very Borg-like.

But anyway, it probably behooves me in this column to go through the motions and procedurally point out how there’s evidence that this whole shitstorm was kicked up without any of the agitators actually tuning into what Harding, Sloan, and the New York Philharmonic had to say about Beethoven, Symphony No. 5, and classical music. Harding and Sloan pointed to the New York Post’s opinion article on the matter as a good example, which characterized the episode as extending the idea that Beethoven’s music itself is the “soundtrack” for “white privilege” and oppression. “They make very liberal use of air quotes,” they said. “We never used those words or implied them.” Also noteworthy are the repeated instances in which the uproarious blog posts seem to perceive Harding and Sloan as having written their so-called anti-Beethoven argument, suggesting that the furthest any of these critics ever went with the material was reading the marketing copy on the episode page.

And then there are the downloads. As it turns out, this brouhaha didn’t actually result in any particular listening bump for the episode being performatively persecuted. According to download charts shared with me by Harding and Sloan, that third episode ended up tracking listeners along the exact same pattern as the first two episodes. In other words, and to underline the point: despite the noise, nobody actually sat down and genuinely considered what the episode was trying to say.

Which, you know, is not surprising. None of this should be, not now. We should be well beyond the point of being surprised that there are bad faith actors mucking about in our systems of social media, political discourse, and media in general. This deal with Switched On Pop probably isn’t the first case of such things happening within podcasting too, but it’s the most obviously transparent one.

Harding and Sloan are still working their feelings over what happened to them. “Our immediate reaction was laughter, which quickly turned to a deep melancholy, as we saw our work so deeply distorted for the purpose of perpetuating a politics of fear and hatred,” they said. “It was distressing to see our painstakingly produced project so simplistically and disengously reduced into a far-right punching bag example of so-called ‘cancel culture.’”

For what it’s worth, they told me that the episode did generate a positive response from people who actually listened to the thing. The New York Times gave the episode a nice blurb, and Harding maintained that the show received the most positive messages from that episode than anything else they’ve done. “The overwhelming response that we received from listeners was that they loved this approach to classical music and overwhelmingly enjoyed the series,” he said. It was just a weird and horrible thing that happened to them, and they’re grateful to everyone involved in the project — from Vox to the New York Philharmonic, among others — for their unwavering support.

This story also made me think of one other thing. Back in early 2014, Stan Alcorn, then a producer at WNYC and now a reporter/producer at Reveal, wrote an essay for Digg.com titled “Why Audio Never Goes Viral.” (The piece is gone from the site now, but you can still find it on the Wayback Machine.) Much of the essay is fairly outdated at this point, but Alcorn was trying to get at something that many audio people were thinking seriously about at the time: the fact that audio and podcasts don’t travel very well over social media, or over the internet more broadly. Alcorn’s essay came out well before I started this newsletter, but I distinctly remember that it kicked off a sustained round of conversation about podcasting’s general resistance towards internet virality. There were almost-pained complaints about how that lack of digital velocity held back the medium, how it prevented the whole pie from growing, so on and so forth.

We know a lot more about what the internet and social media does to us now than back in 2014, and with the benefit of hindsight, we can perhaps recognize those gripes as being insufficiently nuanced. Maybe you want that resistance, that lack of instant portability. “The beauty of podcasting is that it allows for nuance and extemporaneous discourse where it’s expected that to try on ideas and show how our thinking evolves,” said Harding and Sloan.

They added: “Social media can so easily distort what’s beautiful about podcasting.”