Follow-ups to the Luminary Launch

The thing about this story is that there are so many noteworthy components to it, so many moving pieces. Let’s run through a couple of the big things I’m tracking.

The thing about this story is that there are so many noteworthy components to it, so many moving pieces. Let’s run through a couple of the big things I’m tracking:

(1) In case you missed yesterday’s special newsletter drop: The Joe Rogan Experience, another massive podcast, moved to withdraw its show from the Luminary platform, joining the New York Times’ The Daily and Spotify’s various podcast assets. Rogan’s show was still on the app when I published that piece, but it’s blocked out now.

I mentioned in the piece that there was likely more to come. Received a note yesterday that Barstool Sports, as well, has made a request for withdrawal. Will keep an eye out for others.

(2) If you haven’t checked out the app yet, and if you’re wondering how a withdrawn podcast looks like, here are two samples: 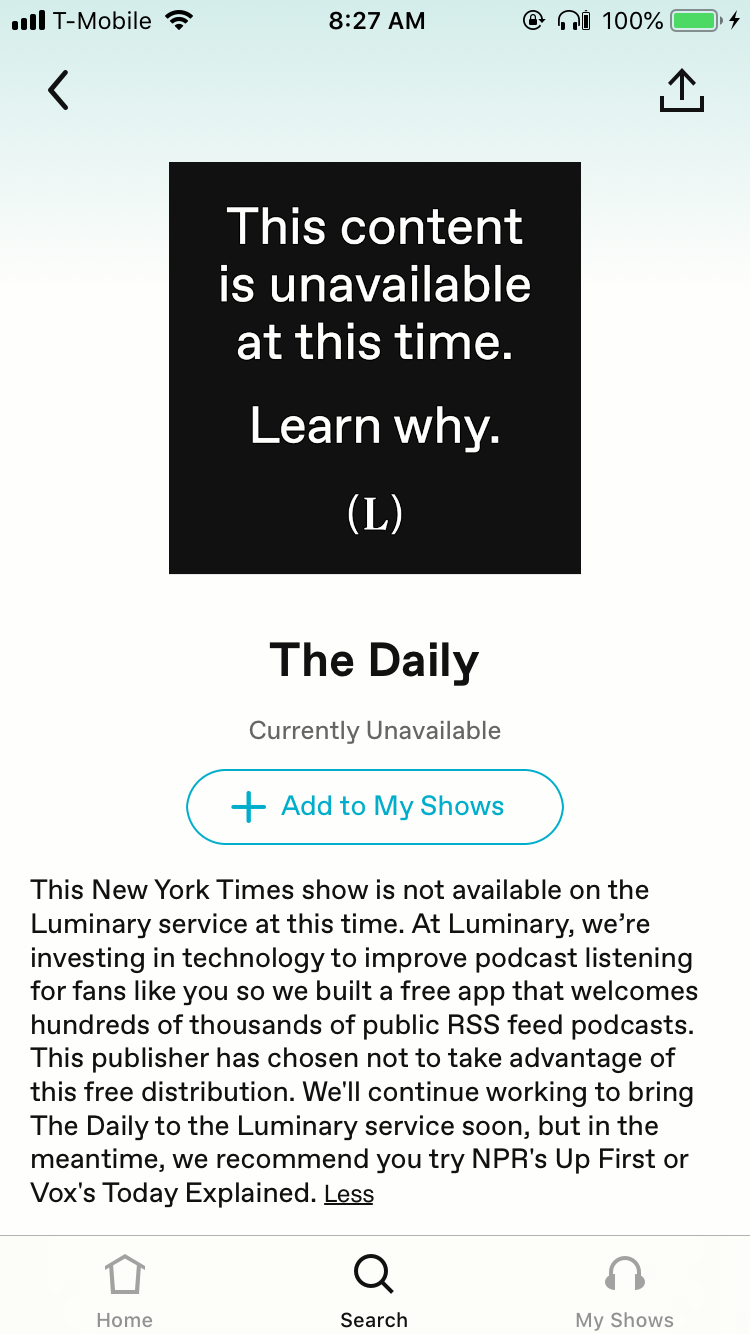 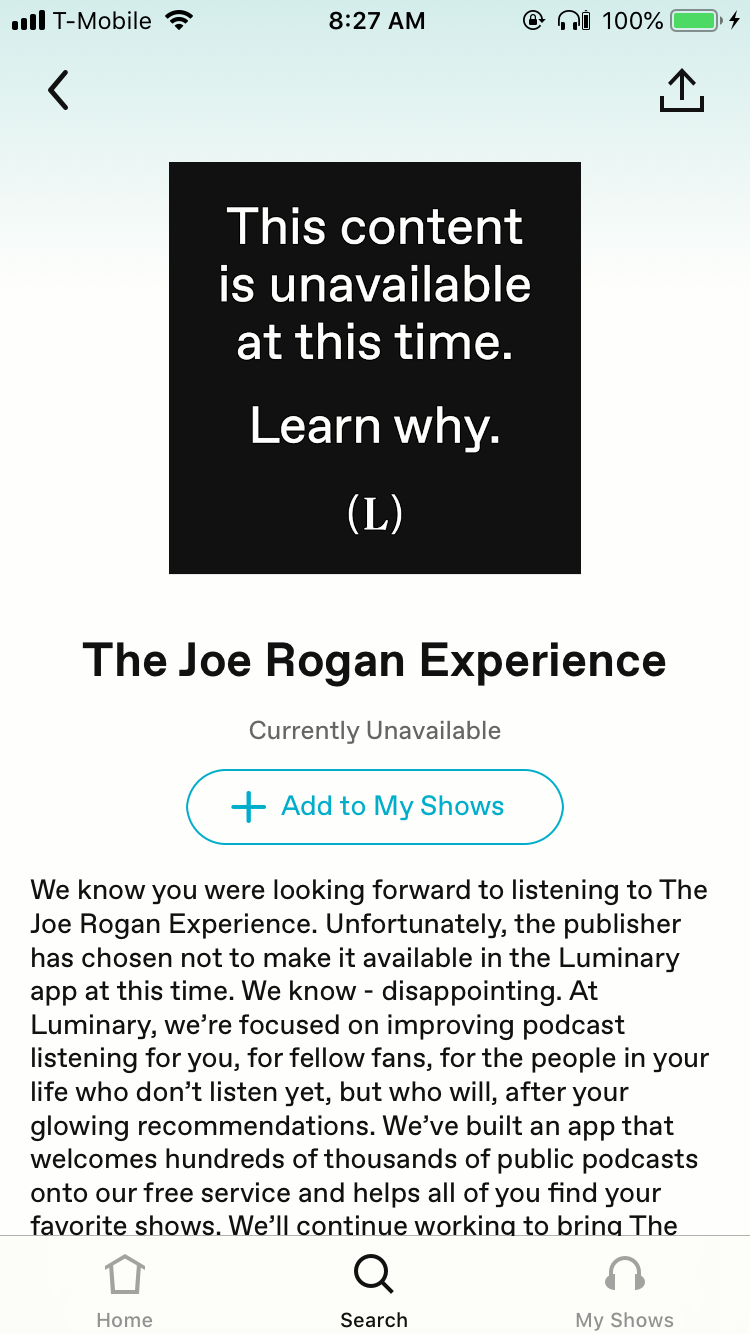 As you can see, it gives off very strong “live sports on cable television” vibes, which is perhaps a design choice with a point. Anyway, here’s something else that’s interesting: if you squint at the text description on The Daily’s entry — the text entries, by the way, appear custom written — you can see the app manually recommending competing shows. “We’ll continue working to bring The Daily to the Luminary service soon,” the text reads. “But in the meantime, we recommend you try NPR’s Up First or Vox’s Today Explained.”

Which makes me think of this next thing…

(3) As always, I really value Stratechery’s Ben Thompson analysis on the app roll-out in the paid subscriber newsletter he sent out on Tuesday. (You should definitely buy a subscription, by the way.) Not going to re-print the full argument here, but wanted to highlight this banger of a takeaway:

“It’s almost cute seeing a service that literally launched hours ago trying to use the tactics of an Aggregator, i.e. push users to a competitor to punish a supplier that won’t accede to their terms. The problem, of course, is that being an Aggregator is not about tactics but about audience, and it is hard to see why The New York Times would want to grant Luminary theirs.”

(4) Pertinent to our interests: the “Podcast RSS Feeds Questions” section in the company’s FAQs. The top-line description reads:

“We welcome open RSS podcasts to Luminary. What exactly is Luminary? We are a free podcast app that anyone can use to listen to hundreds of thousands of publicly available podcasts. We don’t charge for access to your podcast, nor do we ask for any money from you. We will not insert or remove any advertising in any publicly available podcasts on our free app and podcasters will retain 100% of the revenue from advertisements placed in their show. Podcasters whose content is accessible on the free app receive standard data about listeners through their RSS feed. In addition to the free app, we also have a subscription service offering our subscribers access to over 40 premium shows, ad-free and available only on Luminary.”

Also of note: the page includes instructions on how publishers can request the removal of their podcasts from the platform.

Anyway, the line about data in the description — “Podcasters whose content is accessible on the free app receive standard data about listeners through their RSS feed” — is interesting to me, as I keep an eye on this: 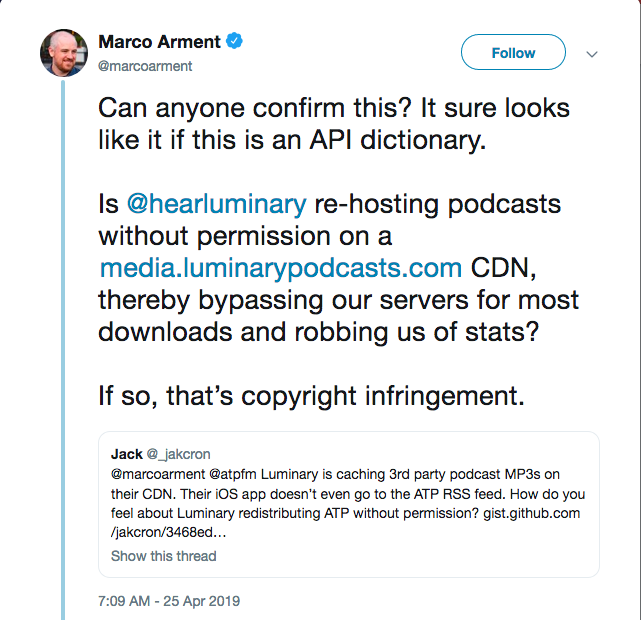 (5) Over at the Apple Podcast platform, a few Luminary originals can be spotted on the upper echelons of the charts, most notably Trevor Noah’s “On Second Thought” (at this writing, sitting on the very top) and The Ringer’s “The Rewatchables: 1999.” Interestingly enough, if you were to click through, the only thing you’d get is a promo directing people to the Luminary app.

I, for one, am super curious about how the Apple-Luminary relationship will look like over time. Because this certainly seems politically complicated…

Meanwhile, however, over at the Apple App store, in prime real estate…. 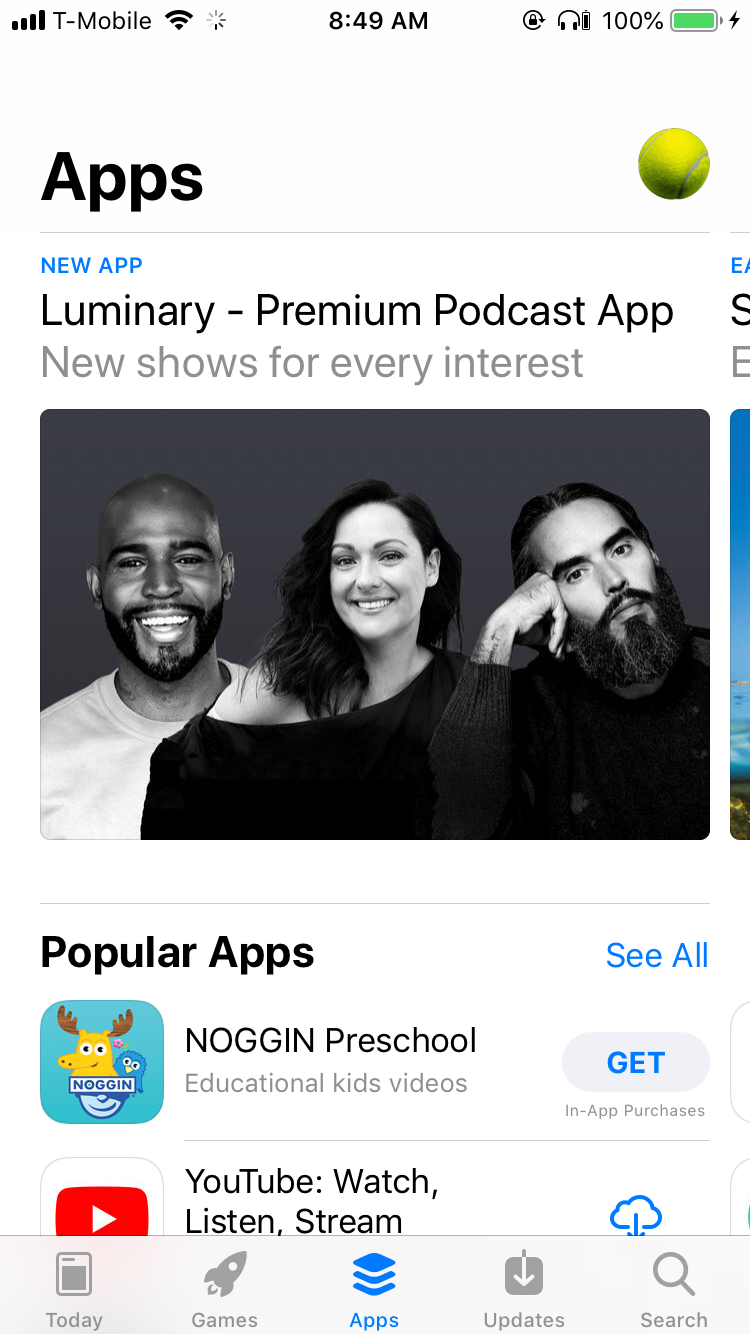 (6) Anyway, I also wanted to give quick bullet-points of some questions being raised in my inbox, DMs, and text messages over the past 48 hours…

Okay, that’s all I got this morning. Let me know if you have any thoughts, or if there’s anything important that I’ve missed.