Audiobooks are not exempt

There’s no news peg to this piece, other than the fact it’s based off a keynote I gave earlier this month at the Audiobook Publishers Association Conference in New York. I took the keynote invite as an opportunity to revisit the subject of audiobooks — from which I had shifted my attention away since last summer’s shake-up of the Audible Originals team, though maybe I shouldn’t have — and think through its current relationship with the podcast world, whatever that may be. This piece isn’t quite that keynote, because a bunch of the ideas contained within has been revised, so if you were there, the Javits Center, sorry, it’s all different now.

The question I wanted to probe: how will the ongoing formation of the podcast industry affect the digital audiobook industry?

One could possibly argue that perhaps there wasn’t really much of an effect at all; that the industries are separate, parallel, and mostly unintrusive of each other. The audiobook industry has been booming for a while now, with the digital audiobook market experiencing double-digit annual growth over the past decade. And that growth trajectory appears to track alongside a similar arc for podcasting across the same period.

Sure, audiobooks remains a modest revenue segment of overall book publishing business compared to print and ebooks. A recent Association of American Publishers (AAP) report, cited by Publishers Perspectives, noted that “downloaded audio” makes up 10.5% of book sales through online retail channel, while the print format is pegged at 43.2% and ebooks at 27%. But the more pertinent point is that digital audiobooks are rapidly growing as a segment compared to other book formats, some of which are even in decline. According to another AAP report, digital audiobooks, recorded as “digital downloads,” grew by a whopping 36.4% between the first halves of 2017 and 2018. In contrast, hardback and paperback revenues grew by 7.2% and +2.6% respectively, while ebooks, as stated in the same report, shrank by 5%. (Notably, physical audiobook revenues declined by 19.9%, which makes sense, because CDs. On a separate note, do book publishers release audiobooks as vinyl?)

There is a similarity that can be drawn between the narratives of audiobooks and podcasts. Both are small but rapidly growing segments of their respective home ecosystems — book publishing in the case of audiobooks, radio in the case of podcasts — at a time when many other segments of those industries appear to be flattening out. There are key differences worth noting, of course, most crucially the fact that digital audiobooks largely grew over the past decade under the auspices of a particularly active dominant platform, Audible, while podcasting largely grew during the same period under the ward of a relatively benign dominant platform, Apple.

If anything, the relationship between audiobooks and podcasts is probably a mutually beneficial one. In the most recent Infinite Dial report, Edison Research observed that “along with the increases in podcast listening, audiobook consumption has also increased, indicating a trend towards increased spoken word audio consumption.” That observation comes from the finding that both audiobook listening and podcast listening had experienced similar growths between 2018 and 2019.

Here are the relevant slides: 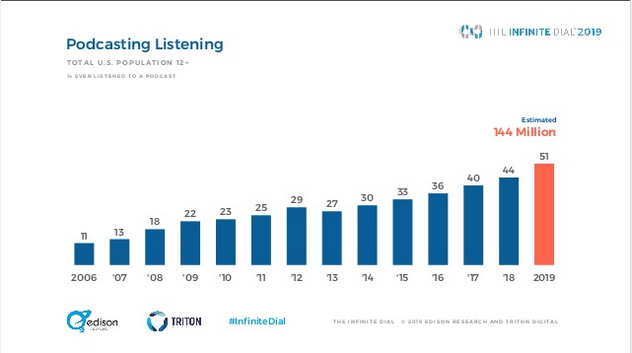 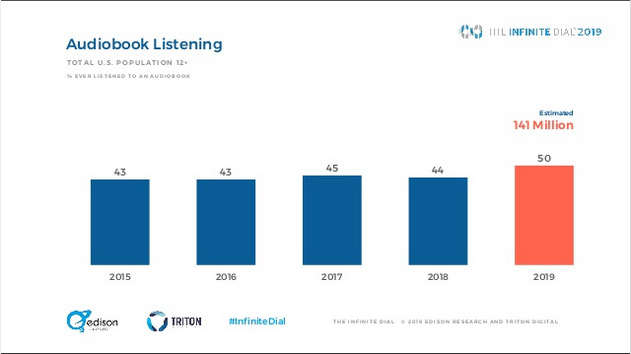 There’s a straightforward interpretation that can be made here: podcasts are helping more people develop an affinity for spoken audio content, prompting those humans to consequentially turn to other forms of spoken audio content, like audiobooks, to satiate that newfound hunger. The same probably goes for the other direction, from audiobooks to podcasts. And so here we are presented with an optimistic view of the future: it’s all audio, it’s all on-demand digital audio, and it’s all boats being lifted by the same rising tide.

That may well be true, but only if the structural conditions of the competitive landscape — namely, how the mediums relate to each other in terms of how they think about audiences, suppliers, and distribution chain — remains the same. But, I mean, come on. What are the odds are that being the case?

To frame the predicament in the form of a question: will these different digital audio worlds continue to exist separate, parallel, and mostly unintrusive of each other? Or will they, over the medium to long term, end up colliding in direct competition?

This is probably a good time to bring up the platforms, a fundamental arbiters and gatekeepers of our modern media universe. Audible, of course, which is already said to account for about 41% of U.S. audiobook unit sales per the Wall Street Journal, but also Spotify, which might seem like a non-sequitur, but really isn’t.

Here’s why I’m grouping the two companies together here: in case you’ve somehow forgotten, since February, Spotify has spent several hundred million dollars acquiring three podcast companies in accordance to its new grand ambition to become an all-consuming audio platform. Podcasting is the headlining subject in this corporate narrative thrust, but as a matter of Spotify’s overarching ambitions, it’s only part of the equation.

In a Freakonomic Radio interview last month, Spotify CEO Daniel Ek popped up to talk about the company and its origin myth, and at one point, he spoke about the various experiences that led the company down the “diversifying away from music” path. Ek offered up a telling anecdote:

We started seeing, in my home country Sweden actually, record companies buying podcasts and uploading them to the platform as another revenue opportunity for them to grow. And it resonated really well with listeners. And that was like the first step.

And then in Germany, record companies there had massive amounts of rights to audio books, which I wasn’t aware of. And they started uploading that to the service and very, very quickly, we went from like no listening to that and now we’re probably if not the biggest, the second-biggest audiobook service in Germany. And this is without our involvement. You know, this just happened by proxy of us being a platform. So we started seeing it resonating really well into people’s lives. And they thought of Spotify not just as a music service but as a service where they can find audio. And it played really well into our strategy of ubiquity — i.e., being on all of these different devices in your home, whether it’s the Alexas or TV screens or in your cars or whatever as just another source where you could play your audio.

Two things to pull from this. Firstly, if I were a betting man, I’d sprinkle some action on the notion that there will come a time, not too far into the future, when Spotify might begin looking into the possibility of securing audiobook distribution rights here in the United States. After all, the audiobook category falls directly into Spotify’s underlying interests in becoming a ubiquitous, all-consuming audio platform, which would involve expanding into other on-demand audio markets — audiobooks included. Sure, the cost of acquiring audiobook rights would be more expensive than the costs of collecting podcast assets (for now, anyway, on both sides of the equation), and Spotify would move to figure out moving audiobooks beyond unit sales economics towards streaming economics. But I wouldn’t discount just how appealing a true second option might be for audiobook publishers operating in the age of Audible… and certainly when Audible is looking to bypass publishers in all sorts of ways.

Audiobook publishers would need to weigh out the balance, though, and that brings me to the second takeaway, which is somewhat waftier. Should Spotify’s diversification gambit work out, the shift could well produce a digital audio environment where many different forms of digital audio content — podcasts, music, maybe even audiobooks — will become more blended together than ever before, which will bring significant ramifications for both audiences and publishers.

In the minds of consumers, this blending may translate to the flattening of various digital audio experiences. By virtue of the way most people navigate media choices over platforms these days, there is a possible future in which digital audio consumers, or at least primary Spotify users, won’t end up being particularly concerned if something is an “audiobook” or a “podcast” or an “audio file with sounds of people doing stuff.” When they pull up the Spotify app to fill up their time, it’s just a wall of mildly differentiated audio content, not unlike the wall that hits you when you pull up Netflix on your Roku or whatever. (The underlying principle here being: the bucket matters as much, if not more, than what’s stored in it.)

How would that flattening impact the life of the audiobook publisher? I reckon audiobook publishers would then find themselves up against the same tenor of competition that magazines and newspapers face these days in the age of Facebook, Google, and whatever’s left of the blogosphere. In the past, audiobooks and podcasts may have indirectly competed with each other as separate and distinct media universes, but the fundamental check and balance there was that each had their own distinct consumer systems. There were structural, habituating things ensuring that it is a specific kind of experience to consume podcasts, just as it is a specific kind of experience to consume audiobooks. However, should Spotify 2.0 successfully mix those two worlds within the same platform, the terms of those specificities no longer hold, In that future, audiobooks participate in a significantly broader horizon of competition, but within a much narrower context.

It should be noted that Audible is also in the middle of a similar kind of mixing. Longtime readers will remember a time not too long ago when Audible’s Originals strategy, then led by NPR vet Eric Nuzum, could reasonably be discussed within the same conversation as podcasting. That originals strategy has since changed, following an executive shuffle in late 2017 and a subsequent team restructure/layoffs in the summer of 2018. And while it seemed like the change was a double-down on the company’s master of the book publishing-oriented supply chain, Audible’s various efforts over the past year suggest something else. Something broader.

There is, of course, all the direct deals the platform has been signing with authors to create audiobook-only products or audiobook-first publishing scenarios. But then you have its growing relationships with content companies — like its deal with Broadway Video to produce long-form scripted comedy originals, including a project by SNL’s Kate McKinnon, as well its deal with Reese Witherspoon’s Hello Sunshine to make “audio content that’s longer than podcasts, but shorter than audio books,” per TechCrunch. Also worth tracking: its deepening pipeline into the theater world, now a couple of years old.

There was a time when it was appropriate to think of Audible as an “audio book publishing” platform and of Spotify as an “on-demand audio everything else” platform. But with all these pieces in front of us, perhaps that assessment was never quite correct. As we move forward in time, it increasingly feels like Audible and Spotify are growing more connected to each other as part of the same ecosystem — which means that audiobooks, as with all other forms of audio media, are not exempt from what’s been going on.